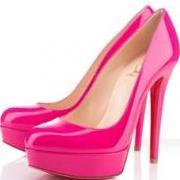 Are men destined to be the predomiant heel wearers?