Could you give up Heels?

I have a GF of 8 years now this XMAS, and one of her comments yesterday was," Aren't you glad you are with someone that you can be yourself, not hide anything, wear what you want, do what you want?"

This is an easy, clear answer... NO!  I won’t get involved with a woman who is “against” my heel wearing, or who places any sort of arbitrary restrictions or limitations on where or when I wear t 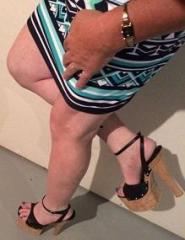 mlroseplant, My thoughts are exactly what Cali said. That women who say they are open-minded find self-erected barriers when those heels are on THEIR man's feet. Sort of like those who espouse di