Who Has Bought Some New SANDALS? 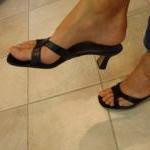 My latest is a pair of JustFab "Loola" mules, which I purchased through Poshmark for the low, low price of $24 plus shipping. They caught my eye because a) they were shiny, b) they were cheap, and c)

Well it IS summertime and summertime = sandal time.  This spring my favorite shoe store, Marmi Shoes had these sandals (called Milina) as a part if their spring collection.  I really liked the style b