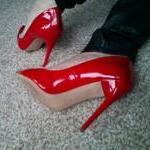 By NrthEastHeel,
March 31 in For Everybody