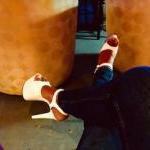 Saturday here in SC was an absolutely gorgeous early spring day with Temperatures In the middle 80’s (27C).  And, I had to go to the grocery store to replenish my food stock.  With the weather being s

here is a photo of these new capri leggings with my 6 inch heel sling backs!  fun stuff!  for the other photos, with other shoes, you'll have to visit my flickr site!